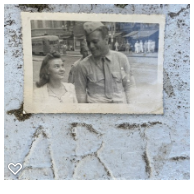 This is a true, first-hand account of the innermost thoughts of Art to his beloved Lois, written while serving our country as a United States Marine during World War II. My name is Debra and I am sharing the gifts of Art’s Love Letters. Art was my grandfather and Lois was my grandmother. It was 1944 and they were 21 years old when the letters began.

We are now on Letter #2. To recap, we know Art and Lois met once and exchanged addresses. Art dated Letter 1 just 4 days prior to the postmark of this next letter. We know they are expected to see each other again on April 14th or 15th. We also know there was a promise Lois made but we do not yet know what it is. Since we have only one side of the story, it makes this Love Story a bit of a mystery. I’ve always loved a good mystery!

Thought I better write again after receiving your letter as the other one went to the old address, probably will not get to you now. {Narrator’s Note: We know that it did reach her}

Your letter was really swell, even though the first line wasn’t exactly complimentary. Suppose you hadn’t promised a letter, would you have still written? You’ve most likely never noticed the man power shortage but there is one, honest.

Now your a girl after my own heart, giving out that info on the new place, tel, etc. I’m on set now and I’ll be there with bells on, even if it means going over the hill. At any rate, will call up Thursday night and give out first hand dope. {Narrator’s Note: dope = info}

Say, you don’t have much faith in me, have you? I gave you my word and am still going strong. After all, it was an argument me not touching the stuff and I’d have a date, right? Don’t think for a moment I’m not earning the date as I sure am. In our barracks we have a “P.A.” which sells beer. Every day I go through there and my buddies all want to treat me. Really no hardship, Lois, when I think of next Friday.

Norfolk is simply rotten, meaning the town. Only use the place to get up to wash. The base is ok, although we are having a bit of trouble with the guard detail. Will explain about it sometime if you’re interested. Also will let you know why I’m home. As for what I’m doing at present, absolutely nothing. Will only be here at most a month or month and a half.

Yep, I like to do just about everything. You said something about skating while up there, well I’d like to try it again. It’s been nigh on three years since I last had them on. That means roller-skating, ice skating is my home.

Lois, it’s now time for all good men to hit the sack. Now, don’t you work too hard. No worry about me simply an onlooker, and ditto to your last words.

P.S. Pardon how scratchy, no can write.

Question #1 From Last Week: I’m still looking to understand where Southern Hospitality exists today so I can go have a first-hand “real McCoy” experience. Answer: My father shared with me that Lois eventually went on to work for the government and was a union advocate for people. He considered this an extension of her southern hospitality.

Question #2 From Last Week: What were the conditions that brought my grandfather a feeling of “guilt” for having entered the church that way? Why were they desperate enough to do it because they had hungry feelings inside? Answer: I am able to piece together his guilt was because he must have hit the “stuff” a little hard that day. It looks like Art made his own promise to Lois to stay away from it so he can have his first date with her. Apparently, Lois drew a boundary line in the sand right off the get go. Good for her!

Question #3 From Last Week: Did we not feed our soldiers? Furthermore, did we not pay them? Why did these boys have to wire home for money? Answer: I learned from my mother they did get paid but their money was sent home and they would have to wire to get any of it. So he essentially was asking for $50 of his own money to be wired to him and received only $30, while his brother received $50.

Question #4 From Last Week: Who was Frankie Seaman? I would like to learn more about this buddy of my grandfather’s. This one still remains a mystery and will stay on the back burner.

Question #5 From Last Week: What did Lois promise to Art? Well now we know she promised to write to him and she fulfilled that promise. Lois is revealing herself to be a woman of compassion, service, healthy boundary lines, and true to her word!

It appears they confirmed meeting on Friday, April 14, 1944 for their first date and may go roller-skating. Yet another way Lois is a woman after my own heart. I recently bought roller-skates and rediscovered my love for it and it makes me feel young again!

To conclude, I researched the postmark date of this letter and the song Long Ago And Far Away from the movie Cover Girl was new in the Top Ten on April 8, 1944. I just had to purchase the movie and watch it and boy was it revealing in more ways than one.

View all posts by Debra Worden